In the Jakarta Komodos Under 10s/Under 9s mixed boys and girls age group, players are provided with a safety-focused environment in which to develop their skills in full-contact rugby.

The Under 10s/9s junior players build on the foundations of full contact rugby learnt during the U8s and develop this to round them further as players. The focus will be on embedding the key basic skills of tackling, passing and rucking through standard set drills and moving these into match scenarios. The stress is placed on teaching consistency, confidence, skill, safety and teamwork. 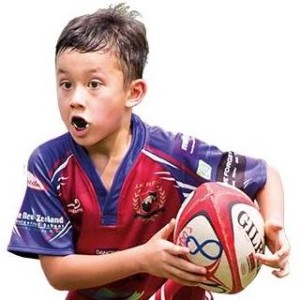 Players will be introduced to other key facets of the game for the first time like scrumming and line outs; they will be instructed on the 10 positions of mini-rugby, the roles of each of the positions and where to place themselves on the field. Players will have the opportunity to trial the various positions to find out where they perform best and where they can further develop their rugby life.

Working in set pieces and understanding the various positions will promote supportive play and team work between the players as they start to rely on each another, players will learn the fundamentals of momentum rugby, where moving forward is what individual players and the team as a whole should strive to achieve.

As with the Under 8s and 7s, the Komodos are aiming to play as many competitive matches this season as possible. This will not only include tournaments in Jakarta and Bali, as well as abroad in Singapore and Thailand, but it is hoped that we will be involved in more regular internal matches.

By the time of the Centaurs International Mini Youth Rugby Tournament in Singapore in December, the Under 9s and 10s will have been drilled on:

• To go safely into tackles, while making the ball available
• To aim and tackle with their shoulders, with binding arms
• To pass and catch accurately without dropping the ball
• How to form rucks and mauls, gain forward momentum and clear the ball out
• To follow the captain’s directions and position themselves correctly at rucks, mauls, lineouts, kick-offs and penalties
• To follow the captains strategic calls with the 10-ruck and wing-ruck moves that follow scrums, mauls and lineouts
• The backline players will play to get the ball to the wing
• The backline players will know to attack deep and fast, while defending from a flat position on the off-side line
• The fly-half and centre will be able to straighten the line and take in defenders, creating outside opportunities for the wing
• Forwards will learn to contest in lineouts, rucks and mauls. For safety, scrums will be uncontested
• Forwards will learn to carry out rush and cross defence after scrums and lineouts

In 2017/2018, in the lead-up to tours in Bangkok and Singapore, we will continue to drill the above basic skills, while focusing on individual skill development and advanced forward and backline play. The season will end in May 2017 with a Juniors and Seniors 10s tournament at Jagorawi, the 2017 Crown Jakarta Komodos 10s Tournament.

Saturday sessions will focus on teamwork, positioning and some skills training with at least 20 minutes of mini-rugby, where we play to age-appropriate rules aimed at enjoyment and player safety.

We will follow a participative coaching regime, where volunteer parents will train our young players together with the head-coach. We actively encourage parent involvement and participation. Do not worry if you have no rugby playing or training experience, we are happy to help.

We also ask that parents encourage their children to maintain their fitness levels during week days, with an emphasis on sprint training whenever possible. By mid-season a child should be able to run 5 sets of 30m sprints at 30 second resting intervals while maintaining the same time at full speed.

Kids should also at least once during the week do three sets of five basic core exercises that will be taught at practice, and three sets of push-ups. There is no need to send your boys and girls to body-building class. We will also teach fun passing and tackling drills that your son or daughter can do with you in the living room. 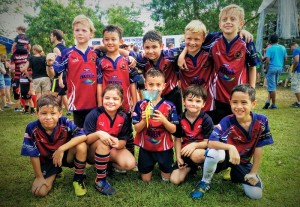