Clay, who played for the now-defunct Western Force based in Perth and will be soon brining his skills to Sydney in NSW, said he was impressed by the growth of rugby in Indonesia and the wider Southeast-Asian region, as well as the support of the expatriate community. 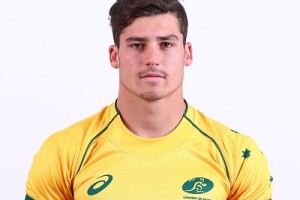 The young man, who is currently completing an engineering degree, led a warm-up session and spent time with a number of the Komodos’ age-group teams, including the Girls Under 16s who are travelling to Singapore next weekend for their first international rugby tour.

Just yesterday, the young women finally secured their first passports and are fizzing about taking their first ever plane flights and the prospect of staying in a five-star hotel just off Orchard Road.

Aaron Meadows, coach of the Under 16 side that consists entirely of players from the Mama Sayang Orphanage, said Clay had helped focus the girls’ minds on important match details on the eve of the tournament.

“We are hoping to be competitive against teams from throughout Asia, including Hong Kong, and Clay added that extra dimension to our training and mindset, including switching from man-on-man defense to a drifting defense,” Aaron said. “He’s a top bloke and his assistance is greatly appreciated.”