In what is being hailed as a major breakthrough in the development of junior rugby in Indonesia, teams from Indonesia, Australia, Timor Leste, Singapore and Thailand have been confirmed for the inaugural Bali Junior Rugby Tournament 2017 at Finns Recreation Club (nee Canggu Club) this weekend (Sept. 23, 24).

Multiple teams from around Indonesia, Southeast Asia and the Asia-Pacific region will field mixed boys and girls teams in the U8, U10 and U12 age groups, boys U14 and U16 teams, and girls U16s teams.

Tournament organiser Johannes Spies, from the Jakarta Komodos Junior Rugby Club, said he wished to thank all the clubs that were sending teams to the inaugural event.

“Just six weeks ago, I doubted we would be able to field enough teams to host the very first Bali Junior Rugby Tournament,” Johan said. “But thanks to the support of overseas clubs, we are happy to say that our fears were entirely misplaced.”

Johan said junior rugby was growing in popularity in Indonesia but teams that wished to play regular competitive matches were often forced to travel abroad to regional tournaments.

“The Komodos love traveling and supporting as many junior competitions in Southeast Asia as we can, so it is really fantastic, really wonderful, to see that our efforts are being reciprocated in Bali,” he said. “Please make no mistake, this is absolutely huge for rugby in Indonesia and is something we can continue to build on in the future. We’re all absolutely fizzing ahead of the weekend.”

Johan said that as a direct result of the tournament, junior rugby clubs had been launched in Bali (two clubs), in Yogyakarta in central Java, the East Java capital of Surabaya and the nation of Timor Leste.

The tournament will be jointly hosted by the Jakarta Komodos Rugby Football Club, Rugby Development Bali, the Bali Rugby Club, with the support of the Indonesian Rugby Union (PRUI) and Finns Recreation Club.

“I really need to thank all the individuals who have worked tirelessly behind the scenes to make this important event a reality. You know who you are.”

Johan encouraged spectators, particularly parents who were considering enrolling their children in rugby, to support the tournament this weekend.

“Rugby is a safe and inclusive sport that promotes fitness, team-work and fair-play on and off the field, regardless of your body type, gender or background,” he said. “We hope to see you on Saturday.” 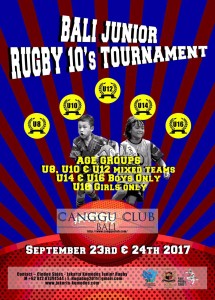