The Jakarta Komodos Junior Rugby Club (JKJRC) is pleased to announce the commencement of the 2017-2018 junior rugby season on Saturday, August 26.

The new season, the only dedicated junior rugby development programme in Indonesia, is open to mixed boys and girls teams in the Under 6s/7s, Under 8s, Under 10s, Under 12s and Under 14s age groups, an Under 16 boys team and a team of young women, which features players from the Mama Sayang Orphanage.

“The 2016-2017 season was a record year for the Komodos in terms of all-round participation and international results,” said KJRC chairperson Jess Djamhoer. “And we are expecting even greater things in the new season ahead.”

Jess encouraged any new potential players to join the Club’s first practise session at the Jagorawi Golf and Country Club on August 26.

“Rugby is a safe, active and fantastic sport that promotes fitness and encourages character building, teamwork and comradery among a diverse group of children, both locals and expats.”

Jess said the Club was looking forward to an inaugural Bali Junior Rugby Tournament in September.

Jess said that in addition to 160 active players, the Club was fortunate to have a local and expatriate rugby coaches who were committed to developing rugby in a safe, fun environment, as well as a superb group of parents that supported the players.

“We are lucky to have this core group of parents and other supporters who love the game of rugby and all the social aspects of the game that that entails, including fund-raising activities for our international tours.”

Jess also thanked the support of the sponsors for the ongoing success of the club.

“The success we have had on and off the field could not have been achieved without our sponsors and we are looking forward to renewing these bonds for the new season, as well as urging any new potential sponsors to become involved.”

“I would reiterate that rugby provides a unique opportunity for expatriate families in Jakarta to get out of their houses on Saturday mornings, enjoy the outdoors and get into the game,” said Jess. 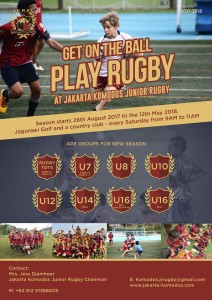